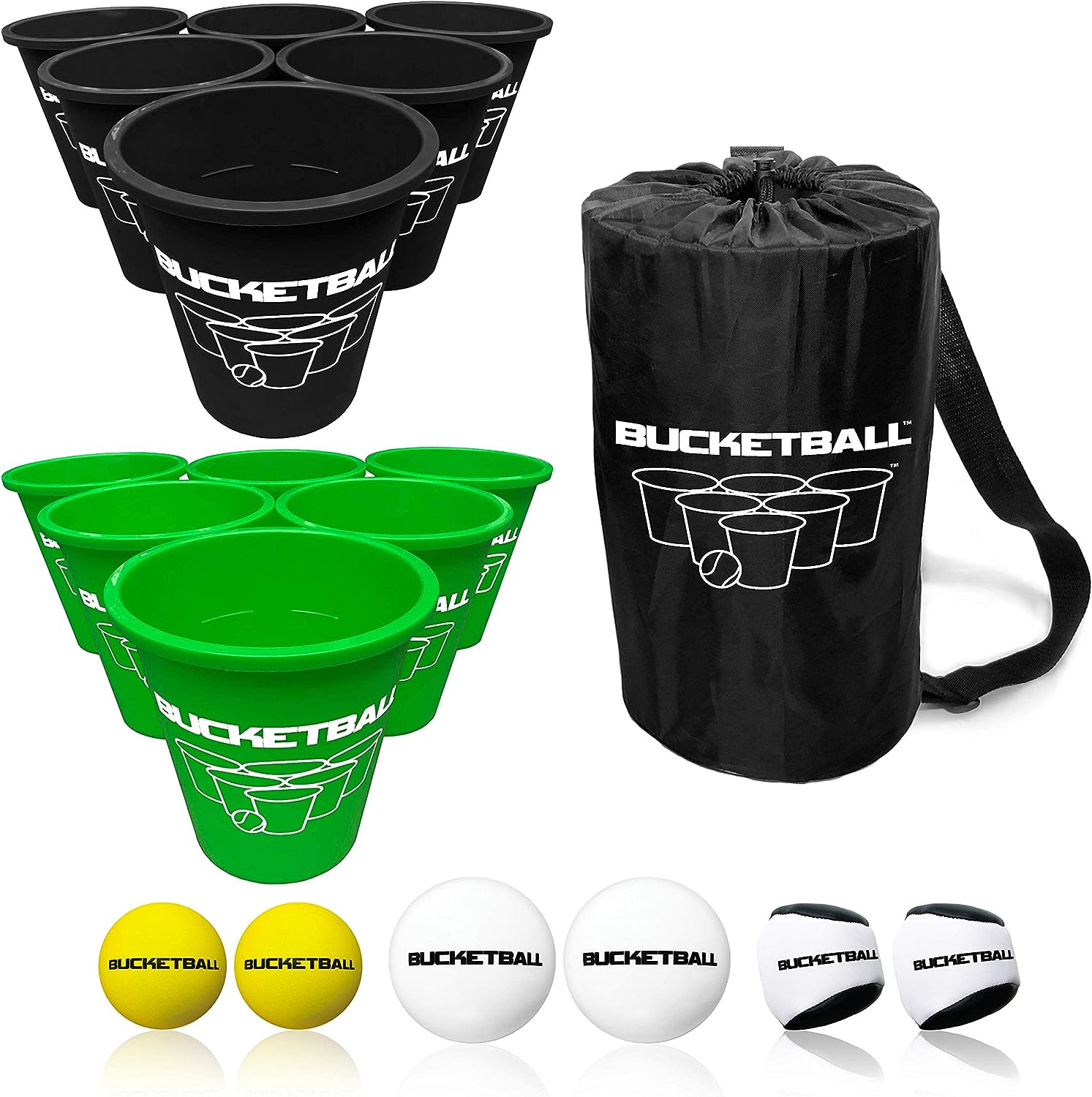 BucketBall is the ultimate outdoor game and is perfect for tailgates, camping, beach, pool, yard, backyard, lawn, weddings, events and more! BucketBall is played like beer pong, but on a larger scale and is family friendly for all ages. BucketBall offers 11 bucket color options so you can mix and match colors to represent your team and/or event. Our Tailgate Game Balls do not bounce or roll far making them perfect for playing on hard flat surfaces. So no more having to chase balls around! We also offer Hybrid Game Balls and Bucket Pong Balls that float on water and provide different game play experiences. You can read more about the differences in our game balls below. Only BucketBall buckets are compatible with our Inflatable Rack Set which allows you to play without filling the buckets with water, sand or some weighted object. The Inflatable Racks make it easy to play BucketBall at tailgates and they even allow you to play on water in the pool or out at the lake. BucketBall is the original yard pong game and offers the highest quality products of its kind. BucketBall is a great addition to other giant outdoor games such as giant tumbling timbers, yard dice, kan jam, spikeball, kubb, cornhole, connect four, and more!

Designed for Tailgating, Camping and Playing on Flat Surfaces

Our Tailgate Game Balls do not bounce or roll far making them perfect for use at tailgates, camping and any flat surface. Our Tailgate Game Balls are made of a vinyl material filled with plastic resin (similar to a hacky sack). So if you miss a bucket, you don't have to chase the balls. Whether you are tailgating for football, baseball, basketball, hockey, college, high school, wedding, or event, BucketBall is the ultimate tailgate game with 11 color bucket options.

"p" BucketBall offers 11 bucket color options to pick and choose from. A complete set consists of 12 buckets and you are able to mix and match colors by choosing 6 buckets of one color and 6 buckets of another color to complete your set. For instance, if you are a Pittsburgh fan, you may want black and yellow buckets. If you want to support breast cancer awareness, you may want all pink buckets. There are tons of possibilities. Here are the bucket color options: black, green, light blue, maroon, navy blue, orange, pink, purple, red silver, and yellow.
"div"

"p" Only BucketBall buckets are compatible with the BucketBall Inflatable Rack set. Our Inflatable Rack Set allows you to play without having to weigh the buckets down with water, sand or some weighted object. The Inflatable Racks allow you to play at tailgates on the ground and they even float on water. If you purchase a starter pack or combo pack, you can easily upgrade to a party pack (which includes the inflatable rack set) by purchasing the BucketBall Party Expansion Pack. Don't get stuck with a knockoff brand where you do not have the ability to use our accessories. Knockoff yard pong buckets are not compatible with our BucketBall products. BucketBall is the original yard pong game and brand that offers the highest quality products of it's kind!